"And if you have five seconds to spare, then I'll tell you the story of my life." –The Smiths, "Half A Person" 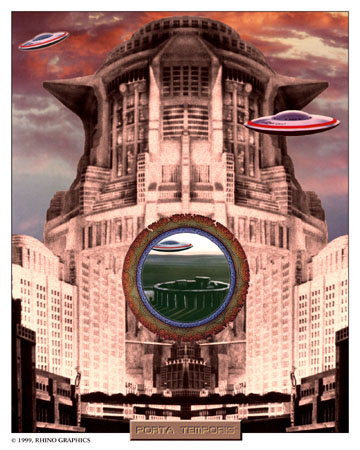 I’m a Kansas City, Missouri-based author and essayist. I blog daily at Posthuman Blues and tweet religiously. My latest book is After the Martian Apocalypse (Paraview Pocket Books, 2004), a speculative and generally well-received examination of extraterrestrial intelligence on the Red Planet. I’m presently at work on a new non-fiction book titled The Cryptoterrestrials: Indigenous Humanoids and the Aliens Among Us, excerpts of which I’ve posted on my blog. If you’re in the mood for a multiplex Fortean anthology, my essay “The Ancients Are Watching” is included in 2008’s Darklore Vol. II. (My first book, Illumined Black, is a collection of naively “Blade Runner”-ish science fiction short-stories. It can still be found in used-book stores and on Amazon.com.)

I’ve been a guest panelist at ConQuest, Kansas City’s premiere science fiction convention. More recently, I’ve lectured in the United States and Canada on subjects ranging from exoarchaeology to transhumanism and have appeared on programs such as Coast to Coast AM, Strange Days . . . Indeed, 21st Century Radio, The Paracast, Binnall of America, and Radio Misterioso. My first play, produced and directed by Paul Kimball, debuted in Halifax, Nova Scotia in late 2007. In early 2009 I appeared as the “investigator” in an episode of “Supernatural Investigator,” a Canadian program covering fringe beliefs and esoteric science. I also make an appearance in “Best Evidence,” an award-winning UFO documentary.

I spend an inordinately large portion of my time pursuing unpopular ideas and esoteric theories with what I sincerely hope is balanced skepticism. I’m a member of the Society for Planetary SETI Research, a group that seeks to use scientific methodology to explore the possibility ofextraterrestrial artifacts in our solar system. I read voraciously; preoccupations include cosmology, nonhuman intelligence, UFOs, consciousness studies, and futurism. Writers I admire include William Gibson, Philip K. Dick and William S. Burroughs.

I tend to think in the future-tense. I’m a skeptic, agnostic and existentialist; I perceive reality as a kind of consensual hallucination that forces us to define our sense of identity without recourse to faith or superstition. I have a deep affinity for 80s pop music; some of my favorite bands are The Cure, R.E.M., Portishead, Talking Heads, and The Smiths. Favorite film-makers include David Cronenberg and David Lynch. I can regularly be found haunting the Country Club Plaza, taking pictures, reading cyberpunk novels, and marinating my synapses in espresso. And I’m a voracious doodler; I’ve put some representative (if dated) drawings in my Sketch Gallery. (For artwork and graphics sent to me by colleagues and friends, please see the Art Gallery.) For more information (including links to archived radio appearances), see theMac FAQ. For photos, refer to my Flickr stream.